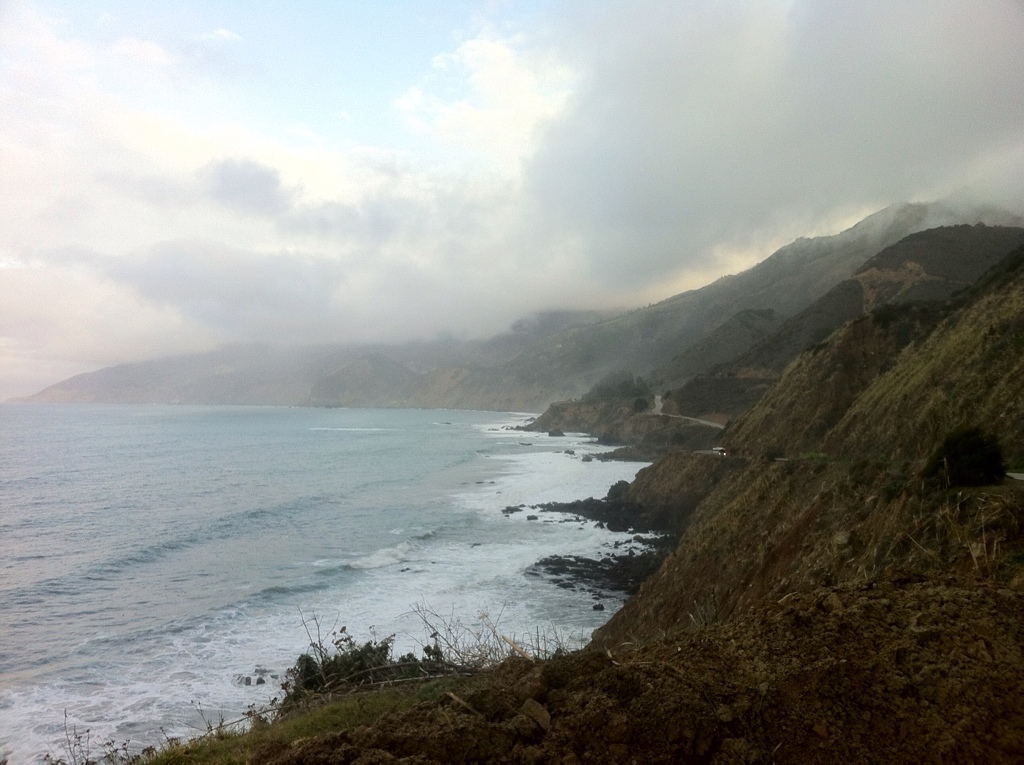 To the Pacific Coast, the Highway on the central coast of California.

It feels more organic now on dualcore, which is the name I will designate to my Apple laptop. It feels more natural now to be typing on it since I have been writing in my journal the past few days, in which I have spent traveling along California’s majestic coast highway, from Los Angeles to San Francisco. I have long been away from readers for the past several weeks I know, and that is due mostly to the physical and mental distance between me and the dualcore in that time, intensified by the traveling. It began with a trip in late January to the desert, when I spent two nights in the Coachella Valley. I’d spent some time there the month before hiking in San Jacinto, where I stood at 8,000 feet and stared down at the rolling sands and desert valleys while surrounded by bitter cold and untouched, delicate hills of snow and pine trees of winter. I remember looking down at the snow and its only disturbance seemed to have been that of a lonesome predator, for the tracks were those of a mountain cat.

I told myself that after that time I would come back shortly after returning from back east for Christmas and I did come back. And I went hiking again though this time it was much warmer, and though I didn’t climb as high as I had in December, I knew that the snow hills had now fallen, but I knew too that they would one day return. I thought of these things while gazing out at the valley and up at the peaks of the mountains that are really so much farther away, and higher and more fierce than they appear from a decent elevation.

Climbing these mountains reminded me of man’s great potential. How he may conquer any obstacle he so desires if he focuses and truly wants it and does not allow, does not accept, any outside disturbance.

A man may bend the universe to his will. We belong to it only before we are born and after we leave this life. But for the time in between, it is we who are the master. A man who conquers this fact conquers time and space. He can freeze time and manipulate the way in which all future aspects of his life physically manifest.

I decided then that I’d travel along the coast of California to San Francisco and revisit the old ghosts along the way that would, at least this time, all gather together in North Beach. I don’t really know what it is about travel that has been so encouraging, and what about it inspires such a sense of metaphysical accomplishment. All I know is that it does bring about these feelings. It did for Kerouac. Maybe that’s the reason why so many writers felt the need to travel, and did travel and wrote of their travels. Ernest Hemingway seems second only to Jack Kerouac in doing so with such accuracy and grace.

Also in these months I have taken an increasing interest in Orson Welles, who, like Hemingway, though he may not have travelled as extensively, appeared to project a grandeur that came from his firm belief in his abilities and above all, in the importance of his art.

It was important that the world have what he was creating for it. If the artist truly believes and knows that his work is important and is committed to it above all else, then he can begin the trek toward becoming a master of his medium. I did not know Orson Welles and I did not know Hemingway. But I am convinced that a man cannot make Citizen Kane, he cannot write A Farewell to Arms, without a love for something equal to the level described.

Maybe it was in honor of Welles and all these giants of men that I stayed the night in San Simeon, where the Hearst Castle stood mightily and mysteriously atop the mountains over the grassy plains; and where the fog blankets the plains and the jagged cliffs upon which the waves of the Pacific crash with such ferocity.

Despite the fear that the scene invoked, there too was an unusual sense of love and beauty in those two to three miles of coast. And despite the silence and lonesome nature of the castle, it seemed like a faithful nightwatchman that has developed a silent adoration for that which he stands to protect every night. And all passerby and travelers that pass through and share with it a sense of awe and respect to the land are shown equal respect. It was then that I decided that in all future travels along this route, I would make San Simeon my beacon, my resting point on the halfway mark between California’s two great cities.

In Big Sur I would feel the presence of all the ghosts. The music of Bob Dylan and Elvis too would echo triumphantly, for this is where they come to observe, to stare out at the Pacific still searching for truth; though they know more of the truth than we do now, as they stand in the air sailing like weary angels gazing into the western sun. With them I would hear the voice of Kerouac and I catch glimpses of the visions of Orson Welles.

There is a feeling that only Rimbaud, Hemingway and Jim Morrison have remained behind, somewhere else but not too far away in the country. With Morrison I suspect it is somewhere in the southwest, somewhere in the desert. Maybe Hemingway cirumnavigates the globe like Helios while Rimbaud is somewhere in a deep alley, a dark underground in Paris at night. But even Bruce Springsteen shows up briefly in Big Sur, atop a silver Palomino just to say hello.

Finally I arrive in San Francisco where they all glide high along the bay, but they always end up meditating when they meet me in the temple that is the poetry room in City Lights Bookstore in the North Beach district. It appears as some mecca of twenty-first century American Bohemia. But it is more. It is the mecca of all the pilgrims of the past and the present and the future. I see lovers and haters, chain-gang imitators and true seekers. I see whites and blacks and orientals and Indians and latins.

Here we all recognize the beauty of America; but we also know that we will one day be children, and that what unites all who inhabit the earth is not only this planet but a spirit and a desire that goes beyond flagpoles and written creeds, one that transcends all of written history and lies in what we have shared with our brothers and our sisters and our mothers and our fathers, our children and our lovers and our friends.

From this realization love will radiate into all other facets of human life, and a beautiful human record will then take form and last throughout the remainder of his future, until the end of his time.