I went to Frisco for the first time when I was a boy, with my mother when I was six years old. We stayed with her cousin back when she used to live in the city. Now she lived across the bay not far from Berkeley. We talked a little of that time but not that much, more about now. Course I didn’t have much to tell her really. ‘The truth is I’m trying to juggle acting with music, which has been kind of taking off for me lately.’ She asked what I’d been doing with music and I told her I’d been playing round town mostly, which was true. More in the valley area, I told her. ‘Wow that’s great’, she said, it was great to try different things. I nodded half-heartedly. I loved her and was extremely happy to still have her out here. One night we went to an old community theater and saw some Neil Simon show, the title I cannot remember. It’d been running for several weeks now. This was the night that Whitney Houston died.

Watching the show I wondered if any of the actors ever entertained any loose ideas of fame and fortune, while acting in a community playhouse in the Bay area. My guess was that they no longer did, if not never at all. Either way the performance of each of these actors, some of whom were in their twenties while others in their fifties and sixties, was so forceful and honest that I couldn’t believe they’d been doing it for as long as they had. I saw no signs of exhaustion, from running the same lines, performing the same scene, hearing the laughs for the same moments as the nights before. Their energy was at a level equal to that of someone putting on a performance like it was their first or their very last, their final opportunity to give it everything they had, to tell all the people something they’d been wanting to say night after night.

This kind of thing was the difference between film and the theater. But it was also the task of every true actor no matter where he made his stage. Watching that show that night reminded me of this. The curse, the privilege of being an actor. It really did have the potential to be a sacred honor. Even in Hollywood, I thought while looking across the bay that night, beyond the Frisco lights and into the darkness toward the south. 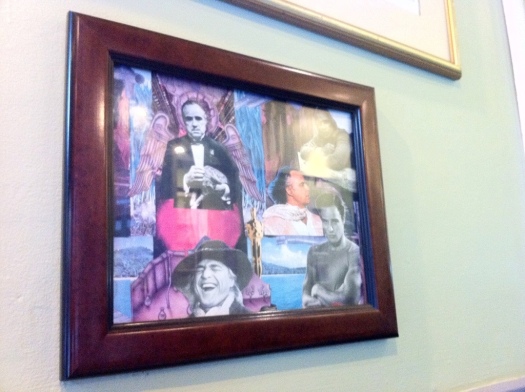 Where the winds dance so fierce and passerby enchant,
Where the dreams lie low, steered, beneath the dim lit street lamps,
I stand wide-eyed and smiling, though frozen cold and standing alone.
This is a city, though never singing, so wise so old, for San Francisco.

Where sad-eyed dogs they trot, and children remain away from rolling rain,
Where lovers stare into eachother’s eyes, beneath some Italian melodic plain,
I reach inside and into the fire, and I offer up a rose,
They stand with grace and never tire, they break me in their row.

We’ve but a night, you and I, to howl to the moon.
The fog will fade and the wind shall ride when daylight comes so soon.
So if you feel the sun, if you hear its echoing chime,
Look to me and take my hand, in our eyes we’ll live a lifetime.

Where the sun strides into the sky, where trains resume an unending climb,
Though rain shall always fall somewhere, we had a night, you and I.
Somewhere it lies, in every night sky, while waiting love shall come and go,
It shines on high, for you and for I, for this city, San Francisco.

I spent the days in Frisco, mostly in the North Beach part of town, the old stomping grounds of Keroauc, Ginsburg and the rest of the boys. The first time I’d been to City Lights Books was two or three years ago when we stopped in the city on the way to Seattle. Inside there is the main floor, then there is down in the basement where everyone used to proclaim their words for a clamoring audience of fellow writers and artists. Finally there is the second-floor poetry room, separated from everything else like a small attic in the corner of a house, where standing inside is like standing inside a temple. That’ll always be the best way to describe it.

It’s quiet and the wooden panels of the floor creak as you walk on them. You cannot hear any of the noise from downstairs, and it is always cold. I felt like King Tut’s tomb should be somewhere close by. The difference between this place and any museum is that unlike museums, it wasn’t trying to feel antiquated and sacred. Nothing was contrived in this old bulding and everything still felt very raw. Just as before, light shone from the window that looked out toward the tops of the buildings outside, casting a beam across the floor that made the room look fragile and holy. On the sloped wall opposite the window, running parallel to the stairs going back down, is a poster of Jack Keroauc and Neal Cassady, the author and hero respectively of ‘On the Road’. No matter what happened, now, or in the near future or toward the end, I knew I’d be writing the rest of my life. If anyone was speaking to me, I thought, it was Kerouac. If I was maintaining any strange spiritual communication with anyone these past few days, I felt it might very well have been the author in that picture; and at no time did I feel it as directly as I did in those moments that one night. I remembered something I’d written some months ago, in December of last year… 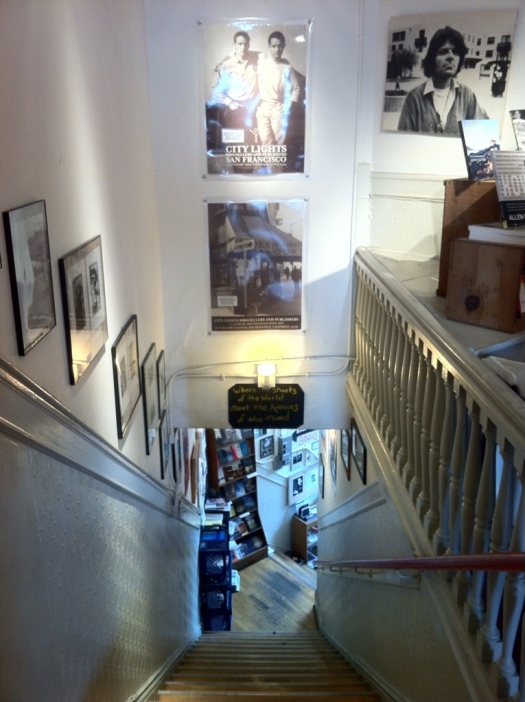 I continued writing from what I remembered writing then, I wrote it in that room of the City Lights bookstore, as the actual city lights peered in from the setting night now and through the window. Light always peered in.

I resume the journey from the dim, crackling fire…

What will I do, and where shall I go?
Shall I stride into the night amid
the firecrackers on the streets of Broadway, and
drive and look for the strangers, and
faces to tell me, to show me?

It’s time to leave sweet darling, after our fateful encounter.
I know now that it was you,
When you called yourself ‘Jonah’ while you stood in the shadows.
But now that we’ve united, we must now depart.
I will not let doubt enter in pursuit.

As I remember I was once in a cave I am now on the streets of San Francisco.

‘I must be on my way’, I say as we depart from eachother’s hands.
As I stand and I step into the night I hope and I pray, and I know that you of all people understand.

The night I left Frisco heading back to LA my tire blew out just as I was getting out of Big Sur. I remembered hitting something rough a few miles back but didn’t think much of it then. I was only two or three miles from the very same motel I’d stayed just a few nights ago in San Simeon. I tried to drive the car a little further but it was done. I would have to change it in the dead of night, on the edge of the coast highway without a gleam of light to guide me.

I stepped out and heard only the waves crashing softly as always on the rocks below, invisible in the darkness. The wind blew soft. Hearst Castle of course still gleamed in the night fog from its distant hilltop. Beyond the castle, far as it was, the only light I could find was that of the full moon. I had a problem. Replacing a tire was one thing, doing so blindly and on the coast highway would be far more interesting.

From the soft hum of the wind and the waves, came another. From the light of the moon and the looming mansion, came another light from the south filling up the highway. The oncoming vehicle was slowing down. It was a truck. By the time it reached my car it had pulled over and parked behind me. I stared at the truck with its lights gleaming in the night. For a moment we stood facing one another as the driver remained inside. Finally the door opened and out he stepped, shuffling toward me.

“I could use the light, yea, thanks, my tire, looks like it blew out.”

It took some ten minutes to get the spare on, since the other problem was getting the car elevated properly, as it sat awkward on the small slope beside the road.

“I’ve got some two-by-fours in the back of my truck we could use to get it propped up.”

He was a very jolly and free-spirited older man, the driver, who looked like he’d explored every corner of the world. His name he said was Buckshot, and he told me he was driving up to Big Sur tonight to be with his kids for the week. He told me of the time he’d spent in prison, and the good years he’d been living with his girlfriend in LA, in the time since. He held an opened bottle of white wine and was insisting that I have a swig but I politely declined.

“Well, when I get back to LA, tell you what,” he said very sincerely, “you look me up and come by my girlfriend’s place and we’ll all have a great time.” His girlfriend was a stripper and the place he spoke of was the club she worked at. I wouldn’t remember the name of it.

“Sounds good Buckshot, and thanks again, really. I owe you.”

“Hey well life’s too short and sometimes shit happens, man. We all gotta look out for eachother in this world.”

He drove off. I had a proper tire put on the next morning in Morros Bay, and I got back in LA the next night. I sent him an email to the address he gave me, which I made sure I had right when he gave it to me, thanking him again for his kindness. But he never got back to me. I tried looking him up, but found no record of anyone under his given name, which he told me twice that night, nor did I find anyone under the name of Buckshot.

People once called Los Angeles the city of Angels. Maybe I’d met one of them. Maybe there were more than ghosts accompanying me in those few days, when I drove to and from San Francisco, on the road through Big Sur.